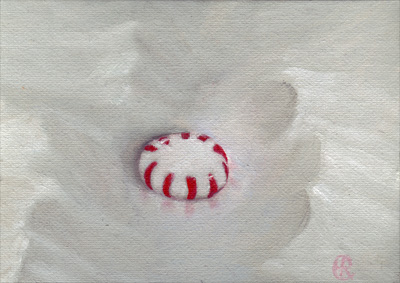 This Christmas season is a rich one for me. My grandmother’s story of “Shoes for the Santo Niño” premiered in New Mexico as an opera for children.

A historic legend of the Santo Niño from Atocha, Spain told of men imprisoned because of their faith, who were permitted to eat only the food brought by their families. When a caliph ordered that only children twelve years old and younger were allowed to deliver the food, these children noticed that the prisoners were being fed by a young boy they did not know. Those who had asked the Virgin de Atocha for a miracle began to suspect the identity of the little boy. The touching story of the Santo Niño depicts the mysterious love that intervenes to save individuals trapped in need and suffering.

When I was a child, I was shocked to find a peppermint abandoned and lying in the snow. A peppermint was a rare gift I would not have thought of dropping. So too did the Santo Niño de Atocha represent an extraordinary treasure. My painting of the peppermint reminds me of treasures we pass by in our rush to get on with life, and the legend of the Santa Niño reminds me to take time to care.

This entry was posted in Fine Art and tagged Childrens' Opera, Christmas, New Mexico, Opera, Peggy Pond Church, Peppermint in the Snow, Shoes for the Santo Niño. Bookmark the permalink.

One Response to This Christmas Season