“Monsoon Mesa” is an 18″ x 12″ oil painting of a New Mexico monsoon. I used to walk alone across a mesa to get home from school. At times I had to walk through dark afternoon monsoon rains. The sudden change from hot dry desert to severe rain storm was dramatic. It demanded desert smarts, courage and strength to keep walking in the right direction. I had to avoid arrroyos, and watch out for lightening. After the storm the beautiful desert land would bloom with green and little flowers after the rain.

This painting is no longer available.

Today if you are mired in complexity, gloom, or loss, imagination may be able to give you a lift, and possibly help solve a problem. Here is a convincing sweet short film called LILA.

Posted in Uncategorized | Tagged Imagination | Comments Off on Imagination

I’m grateful to be a member of Oil Painters of America, and so very happy to have oil painting as a part of my life. I’ve just entered a pear in the OPA online showcase. This pear kept me from my intended job of pruning a prickly Pyracantha. I was gathering my tools to prune when I saw the tremendous beauty of the pear. I had to stop to paint it. What an amazing creation pears are. This Bosc was full of the ever-present symphony of beauty that overwhelms me and calls me to paint.

One part of Vasari Classic Artists’ Oil Colors’ mission is to make the best oil paint possible. Handcrafted. And yes, expensive. Skeptic me decided to stop reading about it and try some.

Oh dear. I confess that beautifully pigmented oil paint makes me want to smear it thickly on the floor and roll in it. This I wanted to devour, to become one with, oh the beauty!

Then I heard my logical brain’s helium-voiced warning reminding me of the cost and humiliation of beastly behavior. No rolling allowed. No devouring. No becoming one with. Beauty is to be approached thoughtfully.

At last I am able to look, envision, design, and sketch. Pigment perfection will drape well on a worthy skeleton. The process itself is a delight! Then at last, the paint. Oh, I shall paint! 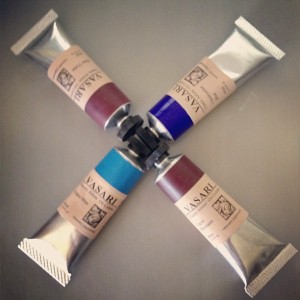 I’m happy to report that my new oil painting, “Canyons,” was juried into the 2013 Laurel Art Guild Exhibit showing at Montpelier Arts Center, in Laurel, Maryland. I’m very grateful to my family and friends for helping me to enter and show in this exhibit, as I’ve been in the hospital. I’ve heard it is a beautiful show. Please let me know if you’ve been able to see it. I’d love to hear what you think of the show. It is open until March 31.

I’ve donated two works in oil to #twitterartexhibit 2013. Hundreds of original post card sized works by international artists were donated to benefit Art Division.Org, a non-profit in Los Angeles that works with underserved young adults who are passionate about creating visual art. You can learn more about this organization at http://artdivision.org/.

The exhibit is being shown until February 10th, 2013, at Exhale Unlimited Gallery. http://www.exhaleunlimited.com/

The wonder of beauty remaining after Hurricane Sandy lead me to create a new post on Facebook.

I’m pleased to announce that a full page and an artist focus on my art work are in this September’s issue of American Art Collector Magazine’s Landscape Special Feature.

When I was young, kids my age from a nearby Pueblo showed up at my school.  I noticed that they didn’t come every day, so I spent a lot of time looking out the window hoping they would show up on their bright yellow bus. Some days they would, and I’d excitedly point, and yell, “They are here, they are here!” We’d be doing math or some other routine thing, so I was told to wait until recess to find my friend who rode the bus.  As soon as the door opened for recess, I’d run to find him and to ask to see his art. He usually had at least one rolled up piece of paper in his hand.

I often became immobile and silent when he unrolled his paper, because the art was beyond anything I had imagined. His work woke me to the possibilities of sunrises over purple mesas set far in the distance with orange and red-streaked clouds feathering over black and Prussian blue in a sky stuffed with multi-colored, carefully shaded, light-blue and white, puffy New Mexican rain clouds.  He did crayon layering like I’d never seen. His horses were horses, unlike my elementary rectangular pig-like horses with long snouts and spindly legs. There were lights and darks, shading, and perspective, but mostly he took my breath away with his use of color. His beautiful color was alive with nature’s spirit.

I miss those days. I still have my First Grade drawing of “Dick and Jane’s Visit to Grandfather’s Farm,” framed by my delighted mother, praised by my teacher, and now hung on my wall. It is mundane compared to those works of my friend. I asked him how he knew how to draw so well. He said he “just looked.” When he told me his secret, I was speechless and breathless all over again. I realized that in all my six long years of life, I had not yet learned to look. 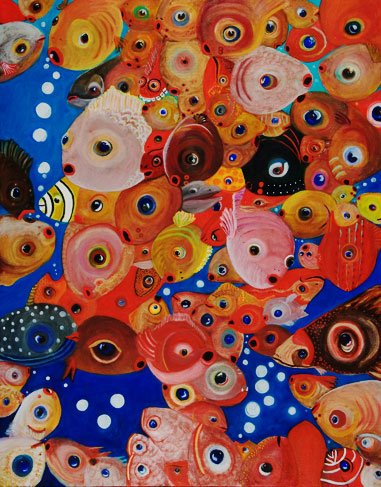 My congratulations to the new owner of my large whimsical oil painting, “I Felt Like a Dork in School Today.”

Painting the 22″ x 28″ oil on canvas was a joy as I imagined the stories and personalities of the many different kinds of fish. Hidden among the multitude is the one who gave the painting its title. The awkward fellow has many of the issues youth deal with. He wears glasses, has spots on his face, and has braces on his fishy teeth. I know fish don’t usually have teeth, but I wanted my empathy for young orthodontic wearers to be obvious. I still remember the embarrassment of being required to wear a headband attached to my orthodontic braces.

Almost everyone has something they struggle with. People often don’t notice the “horrible” thing that is making us cringe about ourselves, but when they do, it may bring them comfort as they realize that they are not alone in their effort to get through life with their own oddity.